“You Are What You Read”

An excerpt by Jodie Jackson from her book, “You Are What You Read”. 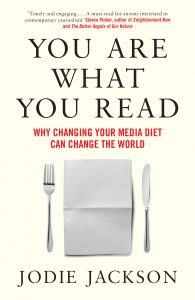 In the early stages of my research into the psychological impact of the news, I went to a constructive journalism workshop. At the beginning, the course director asked all the journalists in attendance why they had decided on their chosen career.

My scepticism about the creators of the news was suspended as I heard the participants’ answers: to make the world a better place, to hold power to account, to inspire, to educate, to give a voice to the voiceless, to expose wrongdoing, to stimulate debate, to challenge the status quo. I was in admiration of their intentions.

I later found that these journalists’ answers were incredibly common through research that showed that the journalists interviewed shared a common characteristic: the desire to contribute to the improvement of the human condition and make the world a better place. They then went on to say that they achieved this by reporting suffering as a way to counteract ignorance and stimulate empathy. This strategy can be very effective. But while it’s true that the news of others’ suffering can conjure empathetic concern and can lead to altruistic behaviour, which may reduce that suffering, it can also lead to personal distress. And those who experience such distress will not be concerned with the needs of others. Instead they will seek to reduce their own suffering by withdrawing or avoiding the news.

The initial buzz that had been created by these noble and inspired answers was quickly dulled as I began researching how people feel when they watch or read the news. Their dispirited answers included comments like depressed, paranoid, hopeless, insignificant and scared about our future.

The news is supposed to empower people by enlightening them with information that they otherwise may not have known. It should also help them zoom out of their personal lives and allow them to feel connected to the world around them. But it seems that when some people lift their head above their personal horizon, they immediately want to retreat to the safety of their own surroundings. They may even decide to put their head in the sand and ignore the wider world for the sake of their sanity; deciding to remain unaware of the daily disasters and instead choose the more comforting thought that ‘ignorance is bliss’.

People that avoid the news are often judged because of the enormous social pressure to be well informed. If you don’t know the detail of global policies, domestic issues and the latest corruption, you are often tarnished with the disapproving titles of ill-educated, naïve, lazy, self-involved or shallow. However, having spoken to some wildly intelligent, caring, benevolent and creative individuals who have chosen not to expose themselves to the news regularly, I can say that this is not always the case.

Although it is common for journalists to want to believe the stories they tell make the world a better place, it is more difficult to digest the idea that the news they are creating can actually cause harm. But it is time we publicly acknowledge that good intentions can have unintended consequences, and the stories we are told about in the news do not always have the positive impact that was intended by their writers.

We know that the news predominantly reports the problems of the world, from systemic social issues of poverty and inequality to individual petty crime, with very little to comfort the reader. We accept that these are the types of stories we expect to hear from the news. This expectation has become so entrenched in the news industry that a television news programme can have ‘more images of violence, suffering and death in a half hour than most people would normally view in a lifetime’.

So what effect does all this bad news have on us?

It is important that we ask this because the subtle potency of the news appears largely unquestioned by the very consumers who are affected by its content. Instead of questioning it, many routinely defend its position. But with the average American spending seventy minutes a day absorbing news content, it is important that we ask what are the psychological effects that the news has on us. It is time we, the consumers, turn the investigative lens on the news industry to expose the effects of the negativity bias on our mental health, the health of our democracy and our society. Once people begin to ask questions, it may be that people do not so quickly defend the incessant negativity of the news.

Jodie Jackson is an author, researcher and campaigner. She holds a Master’s Degree in Applied Positive Psychology from the University of East London (UK) where she investigated the psychological impact of the news. As she discovered evidence of the beneficial effects of solutions-focused news on our wellbeing, she grew convinced of the need to spread consumer awareness. She is a regular speaker at media conferences and universities. Her new book is You Are What You Read: Why Changing Your Media Diet Can Change the World(Unbound, September 3, 2019). See more at www.jodiejackson.com, and find her on twitter at @jacksonjodie21