You are Not Alone: The Epidemic of Self-Judgment 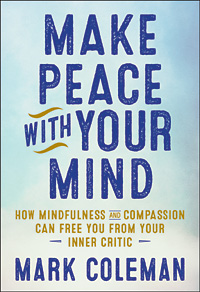 An Excerpt from Make Peace with Your Mind

Many of us are well acquainted with our “Inner Critic.” It is the voice that makes us second-guess our every step by saying “not enough,” “not good enough,” or sometimes “too much.” At times the Inner Critic can be so strong that it feels invincible, but bestselling author and renowned meditation teacher Mark Coleman promises that it is not in his new book Make Peace with Your Mind: How Mindfulness and Compassion Can Free You from Your Inner Critic. We hope you’ll enjoy this short excerpt.

Have you noticed how many people give themselves a hard time? How friends and colleagues routinely put themselves down and happily confess all their faults and problems? It is culturally acceptable to talk about your faults and challenges, and of course to complain ad nauseam about the faults of others. As Lucy so eloquently put it in a Peanuts cartoon (speaking to Charlie Brown): “The problem with you, Charlie, is that you are you.”

At the same time it is quite the norm not to talk about one’s successes, strengths, and accomplishments. In some cultures, that is considered gauche and egotistical. Being raised in England, I was taught it was a faux pas to speak of your talents and gifts or celebrate your victories. It is as if you are rubbing other people’s nose in the dirt by doing so. Yet it is fine to lead with one’s inadequacies and problems.

In the United States the mental health statistics are alarming. One in ten Americans is on some form of antidepressant. One in five took some kind of behavioral medication in 2010. The number of suicides is equally staggering: forty thousand per year. And that’s just the numbers that are reported. Though the numbers may be higher in the United States than elsewhere, many industrialized countries report similarly alarming statistics.

Based on the work I have done with people over the past fifteen years on six continents, I believe the inner critic is a significant cause of much of the depression, anxiety, and suicide prevalent today. When the critic’s voices are loud, sharp, and rampant, it is hard to keep a sense of self-worth or feel there is a meaning or purpose in life.

Though the statistics are startling, there is one sad but reassuring fact among them: you are not alone. One of the biggest burdens we can carry when we are depressed, or just lost in a swamp of self-reproach, is the troubling thought that we are unusual to have such problems. We mistakenly believe that we are the only ones afflicted by nagging, negative stories about ourselves. It is bad enough to have such troubling thoughts, but the idea that you may be the only “loser” in the room who has them is doubly shaming, and harder to work with.

In workshops that I lead about the inner critic, one of the most healing outcomes is people’s realization that they are not the only ones with a judging mind. Isolation and the belief that you’re the odd one out, that everyone but you is having a merry old time, just compounds these mental challenges.

When I have people pair up at an inner-critic workshop and share their list of self-judgments, there is at first a sense of great apprehension and embarrassment, and a fear of the shame that may ensue. But when they actually do share their lists, a collective relief sweeps the room. The realization that we share similar self-judgments and negative mental habits brings this sense of relief. The thought that we can help each other if we share a similar burden also nurtures an important sense of camaraderie and social support.

As you go about your life — whether at home, at work, with friends, running errands, watching television — start paying attention to how you see the critic operating in other people. We can certainly observe it when hearing politicians and pundits barking on the radio or when movie critics are demolishing the latest film.

Also notice the inner critic in conversations, in the way people jokingly put themselves down: “Oh, you know me. I’m hopeless at math. Why don’t you do the numbers?” “My hair looks terrible today.” “I look awful in those photos.” “I made a real mess of that meeting at work yesterday.” These are all common parts of social conversation.

Observe what happens when you notice this behavior. Can you relate to others when they are putting themselves or others down? Does it feel familiar or even comfortable? Do you feel a sense of camaraderie? Can you see how ubiquitous this pattern is? Does it leave you feeling less alone, now that you can see you are not the only person with a sadistic inner voice? Similarly, do you feel compassion for others when they talk about themselves so negatively?

The more you can observe in this way, the more you will relieve yourself of the burdensome feeling that you are the only one with a problem, that you alone have a voice you should be ashamed of. Instead you may begin to feel a sense of connection with others, a feeling that you too are part of the shared human struggle, trying to find a way to be at peace amid all our conditioning and mental gyrations. 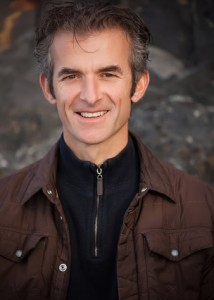 Mark Coleman is the author of Make Peace with Your Mind and Awake in the Wild.  He is the founder of the Mindfulness Institute and has an MA in Clinical Psychology. Mark has guided students on five continents as a corporate consultant, counselor, meditation teacher, and wilderness guide. He lives in Northern California. Visit him online at www.markcoleman.org.

Excerpted from Make Peace with Your Mind. Copyright © 2016 by Mark Coleman. Printed with permission from New World Library — www.newworldlibrary.com.