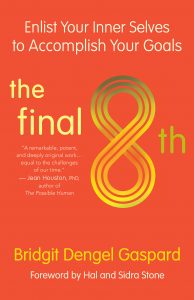 An excerpt from The Final 8th
by Bridgit Dengel Gaspard, LCSW

No one enjoys being stuck and the misery is amplified when we have accomplished multiple steps toward a cherished goal — whether breaking a bad habit, losing weight, building a business, finding a mate, or finishing a degree — but just can’t seem to complete it.

In The Final 8th: Enlist Your Inner Selves to Accomplish Your Goals, author and therapist Bridgit Dengel Gaspard calls this demoralizing quandary when someone is so close to the finish line but just can’t seem to cross it “the final 8th” and introduces a powerful technique called voice dialogue to help readers recognize and overcome internal blocks that are preventing them from achieving their goals. We hope you’ll enjoy this excerpt from the book.

The Inner Critic is programmed to be suspicious of anything new. It is wired toward attachment to your early caregivers and their core negative beliefs. To this persona, the final eighth is perilous! Because its honorable task is to protect you by avoiding abandonment, it’s hypervigilant for dangers like judgment, hurt, shame, or rejection. Its dysfunctional strategy is to criticize you before someone else does in the hopes of making you “better” in some way. Your Inner Critic simultaneously assumes you’re inferior (which effectively enforces core negative beliefs) and urges you to move ahead (which presupposes that you have the ability to do so) and thus berates you both for being inferior and for squandering your superior talents. This keeps you in your double bind, a dynamic your Inner Critic may not have been aware of until now.

The Inner Critic’s gifts are that it never seems to run out of energy or creativity, second-guess itself, or become overwhelmed with insecurity. Hal and Sidra Stone describe the Inner Critic as having “the intelligence of a genius, an uncanny intuition, an ability to analyze our feelings and motivations, a sweeping gaze that notices the tiniest of details, and, in general, an unerring ability to see and to magnify all our faults and shortcomings. It seems to be a lot more intelligent and perceptive than we ordinary mortals are.”

The energy and insights of the Inner Critic are like fire, which can either be harnessed to sauté piquant truffle fries or let loose to burn the barn down. Here’s an exercise that can help harness the skills of your Inner Critic and other parts.

As an example, here are my Inner Critic’s abilities:

The ability to keenly observe how I don’t measure up.

The ability to brutally assess how I don’t measure up.

Limitless energy to judge how I don’t measure up.

Surprise your Inner Critic with a love letter. Thank it for having been such a loyal protector, with its blind devotion to saving you from abandonment at any cost. Let it know that the days of living as if your core negative beliefs were true are over. It is now the era of core positivity. In a word or two, describe how that feels. Some of my clients have chosen words such as radiant, free, and liberated.

Redefine and upgrade the talents and creative energies of the Inner Critic for beneficial use. Its laser-sharp perception is now assigned to supporting your final eighth goals.

Here’s how my Inner Critic’s abilities are reassigned:

Its ability for keen observation can be applied to polishing my writing.

Its ability for brutal assessment can be transformed into highly efficient time management, reminding me that if I want to accomplish all I hope to in a day, I need to get organized first.

Its limitless energy to judge can be transformed into a vast supply of energy to fuel my creativity and fun curiosity instead of reinforcing my core negative belief.

Here are examples from a client who recommissioned her Perfectionist:

Ability to maintain high standards, which I never measure up to.

Ability to be tireless, which makes me feel terrible, as, inevitably, I don’t measure up.

Ability to be competitive, though I never measure up or make the cut.

Again, surprise this alter ego with a love letter thanking it for its protection and letting it know that the time of living as if your core negative beliefs were true is over. It is now the era of core positivity. In a word or two, describe how that feels.

Reassign and promote the talents and creative energies of these other selves. Make sure you assign them roles appropriate to their age and strengths: in other words, don’t ask your Magical Inner Child to function as the CEO of your final eighth project.

Here’s how my client reassigned the superpowers of her Perfectionist:

The Perfectionist’s high standards will be applied to make my home beautiful, because it makes me feel good and I deserve it.

The ability to be tireless will be applied to my final eighth goal, without my core negative belief putting the brakes on me all the time.

Its competitiveness will be assigned to motivating me so that when I set out to do something, like my final eighth, I have the strength to persevere.

Bridgit Dengel Gaspard, LCSW, is the author of The Final 8th and the founder of the New York Voice Dialogue Institute. She is a former performer who earned a master’s degree from Columbia University and teaches at numerous professional settings including Omega Institute. She lives in New York City, where she maintains a thriving private practice. Visit her online at  https://www.final8th.com/.

Excerpted from the book The Final 8th. Copyright ©2020 by Bridgit Dengel Gaspard. Printed with permission from New World Library — www.newworldlibrary.com.