Play, Autism, and The PLAY Project 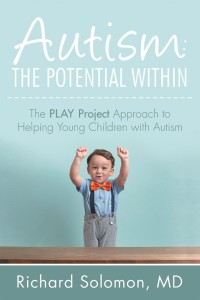 Just today in the New York Times there was an opinion piece by Paul Tough entitled To Help Children, Coach Their Parents about research on young children who were at high risk for developmental and behavioral problems in Jamaica. What did they coach the parents to do? Promote more educational activities? Nope. Use techniques to help children improve their behavior? Guess again. Play more? Yes! Parents in one arm of the research study were coached to spend time enjoying being with their child in a fun and interactive way with long term positive impacts on I.Q., less aggressive behavior and better self control.

Recently, a colleague of mine, Erica Christakis PhD in her just published, best selling book called The Importance of Being Little called for a return to playfulness as the best way of helping the pre-school child educationally. She referenced our program, The PLAY Project’s Autism Early Intervention program, as an example of how play can help children with autism spectrum disorders (ASD).

Play and autism? Can children with autism learn to play with others? The brains of children with autism have disorganized, under-connected, neuronal networks. It’s like having a loose net of brain cells that let’s the complexity of the world fall through, that drives these children have repetitive, stereotyped, and obsessive interests—the opposite of play. It explains their lack of interest in socializing, even with their own parents! I can’t tell you how many parents have told me how sad it was not to be able to connect with their own child. When it comes to their developmental course, children with ASD are their own worst enemies—seeking isolation and sameness. They do not play well with others. The saving grace is something called ‘neuronal plasticity’ the ability of the brain to form better neuronal connections through experience. We just have to find our way to play’s neuronal structures within the brain of children with ASD.

It can be done. Children with autism—like all children—have so much potential!

After 25 years of working with children on the spectrum and 15 years of being the medical director of The PLAY Project, I can testify to the power of coaching parents to use the power of play. The PLAY Project is one of the few, proven national programs that uses play as a primary intervention for children with ASD. Through coaching parents in playful ways we not only help the adults connect socially with the child, but we help the child’s development and social interaction. Most important of all, through play we helped the child’s autism symptoms improve!

About the author
A leader in the field of autism, Richard Solomon, M.D., has more than 25 years of experience working with thousands of children with Autism Spectrum Disorder and their families. In one of the largest and most rigorous research studies in the U.S., The PLAY Project was shown to be evidence-based; parents can learn to improve their relationship with their child and children in the study showed significant improvement in several measures of development. He has worked with Mr. Rogers, T. Barry Brazelton, Stanley Greenspan and Ivar Lovaas. He is currently in private practice as a developmental and behavioral pediatrician in Ann Arbor, Mich.

You can read more about Dr. Solomon and his book in the press release here or visit the website for more information.