Teri Williams is a Shamanic and Intuitive Practitioner as well as host of Soulful Living at Empower Radio. She has over 25 years’ experience in the healing arts assisting others to unleash their potential within for overall good health and well-being. Her specialties include: Shamanic Journey Sessions, Soul Retrieval, Soul Alchemy, Reiki, Energy work and Acupressure. Teri is also a Business Consultant and Adviser, working with entrepreneurs and healing arts professionals to grow their brand online and off line. Find more information about Teri at http://SoulPractices.com

Eating plants is good for the pants! 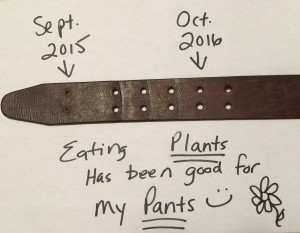 The picture shown above is of my favorite belts.  I’ve had it for years.  Notice the two notches added at the top of the belt.  That’s where I was in September of 2015.  And…one year later I’m down to the fourth set of notches.

I dropped the equivalent of 5 notches!

When I began eating 100% plant-based my motivations were for my husband and I to rid our bodies of the toxins and blockage from years of eating animal products.  Of course compassion for all beings and helping our planet were also big factors.  I had no idea that, as a result, I would naturally lose weight; somewhere around 30 pounds and five inches. According to some studies I was considered extremely overweight.  I thought I was “just a little curvy” and was quite happy with the way I looked.

In a previous blog I mentioned that is was a difficult transition and that I verged on being depressed.  My mind and body went through withdrawals, my hormones were out of control and I was an emotional wreck.  Most of you that know me would not believe I could be anything but blissful – it happens! I was heading into a deep funk.

What I really thought, what I  was afraid of was that I would be in for a lifelong battle of trying to figure out what to eat and where, that I would always be hungry.  That is simply not my truth. It took creating new habits, or routines, and experimenting with new foods.  I’m an awesome cook, so my fear, like most fear, was unwarranted.  All I needed to do was create space for a new way to cook, a new way to LIVE. To my surprise, I cook almost everything I used to cook, only now I do it without any animal products whatsoever and without oil! My family will testify to the fact that there is no shortage of great food in my house.

A year later as I look at those holes in my belt and think about the fact that I can easily wear my 25 year old daughters clothes, a voice in my head says, “You are one sexy vegan grandma!” (My husband thinks so, too!)

P.S. After the first of the year, my friend, colleague and soul sister, Lisa Powell Graham of the “Sexy Vegan Project” and I will be sharing some inspiring work for anyone who wants to lean into (or jump all the way in) being vegan.  Until then, for insight and support, visit my contact page and send me a note or find me on Facebook!