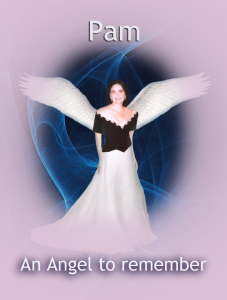 She was breathtakingly beautiful, brilliant and bewitching!  She was passionate, powerful and precocious.  Her power to heal transcended anyone’s imagination.  She was a goddess, a seductress, a sleuth, seeker of the truth and transformer.  Pamela was a magician and worked her magic on all the wounded souls who had the good fortune to be in her presence and professional care.  She was relentless to a fault, persistent, driven by internal forces that were challenging to temper.  She stood her ground no matter the consequences, drew the lightening to herself to exorcise her patients who had been ravaged during their childhood.  She was Joan of Arc, Mother Teresa, Helen of Troy and Pami Annie Daisy, all rolled up in one sensational being.  She was a loving sister, a dedicated therapist, a compassionate friend, her Daddy’s little girl and my precious daughter.  We lost her to bipolar disorder and a dysfunctional sub-standard health system that today, still exists.

October 1 was her birthday.  She would have been 53 years old.  Our lives were changed forever on that fateful morning eighteen years ago, when her mental illness pushed her out the window of a 15 story building.  Pami would never have made that decision.  She loved life, her family, friends, colleagues and clients, who until today, have never forgotten her life force and the impact she made on their lives. Her mental illness won the battle for life.  It sentenced her to death. It invaded her brain like a midnight stalker that slowly, surreptitiously, and steadfastly eroded her thought processes to believe she had been chosen as a mediator between God and Lucifer.  She had been made to believe that the devil was going to take her soul and cried out for help that never came.  Instead, she fell through the cracks of a system that failed her and so many others with mental illness.

How could that have happened?  Why did she plunge fifteen stories to her death? What were the tortured thoughts that executed that decision?    I will never know.  I will never get closure.  This I have accepted.  I will never have the answer to those questions and more; this too I have accepted.  What I can never accept is the apathetic attitude our country has towards mental illness.   I made a choice never to be a victim.  I made a decision not to accept being just a survivor.  I chose to be a Phoenix, like the mythological bird that rises from the ashes to make a mission out of my loss; a loss that affected so many others and a loss that is pervasive in our country.  I want to eradicate the shame and stigma from mental illness.  I want to be a change agent for everyone who struggles with bipolar disorder and other mental illnesses.  I want to help families who have lost a loved one through suicide due to a mental disorder.  I want to help the families of veterans who lost their husbands, wives, fathers, sons, mothers and daughters.  Twenty-two veterans commit suicide every day.  This is an epidemic and must be treated.  Post- traumatic stress disorder is a mental illness that can and often does, lead to suicide.

When the children of Sandy Hope Elementary were murdered by a madman, the parents became vigilant in their effort to raise the conscious awareness of gun control.  It was when Peter Craig Alderman, the 25 year old young man lost his life in the World Trade Center on 9/11 that his parents became advocates for change and created a foundation in honor of their son’s truncated life.  It was when John Walsh’s young son was abducted and murdered that he became a vigilante for finding predators.  We all chose to become a Phoenix.  We all chose to make our children’s lives matter.

I wrote this blog two days after Pam’s birthday.  I was reflecting on the impact she made on other’s that eighteen years later, when I announced her birthday on Facebook, more than one hundred responses were yielded, all of whom remembered who she was and what she did to make this world a better place.  It is way past midnight as I close this blog.  I was driven to post it before too much time passes since it was posted on Facebook.  She would have loved to have known the impression she made on others and the legacy she left to those who knew her well.

Happy Birthday Pami.  From all of us who were lucky to have known you.  May you rest in peace.