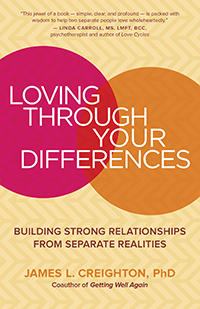 An excerpt from Loving through Your Differences by James L. Creighton, PhD

Couples fight. Sometimes a little, sometimes a lot. Sometimes these fights provide comic relief. At other times they threaten the very survival of the relationship.

Psychologist and relationship consultant James Creighton wrote his new book Loving through Your Differences: Building Strong Relationships from Separate Realities to help reduce conflict between couples, especially those that are based on different perceptions or experiences of reality. The book’s primary aim is to empower couples with the knowledge and practical skills they need to choose to live happily and productively together, finding excitement and fulfillment, rather than disappointment and frustration, in their differences. We hope you’ll enjoy this short excerpt.

In order for couples to jointly reexamine the meanings that they give to each other’s behavior and find new ways of relating to each other, they need to share feelings, thoughts, and beliefs at a very deep level. This requires that both partners feel safe — meaning that they don’t feel judged or criticized for feeling the way they do.

To create a safe environment, couples need to communicate responsibly. This means avoiding behaviors that force the other person into polarized positions. When conflicts get out of control, it is difficult to acknowledge how our own interpretations may have added to the dispute. Yet it is this kind of behavior that can move disputes beyond arguments over who is right into intimate sharing about our most important feelings.

Both people must learn to recognize and avoid communication rooted in blame or judgment, concentrating instead on communicating emotions and the meanings that create them. Even when the other person’s communication seems to create conflict, you can make choices about how you respond. If you can imagine that each of you is a country, your job is to describe what’s going on in your country rather than interpreting or judging what’s going on in the other one.

Here are some basic guidelines for communicating your feelings in a way that reduces defensiveness and reaction:

When you say the other person is responsible for what you feel, that person is likely to feel blamed or accused. They may become defensive and want to protect themselves. We have the beginnings of a full-on battle.

Most of us have learned to communicate in what can be called “you” messages, which are often expressions that judge, challenge, or blame the other person, like these:

“You made me feel…” (blaming the other person for your feelings)

“You are being…” (judging the other person)

“Why are you…?” (challenging or questioning the other person)

One way to remind yourself to communicate a feeling, not a judgment, is to start your sentence with “I’m…” or “I feel…” Psychologists and counselors refer to this kind of message as an “I” message. Here is a comparison of “you” messages and “I” messages:

Just putting “I feel” in front of a judgment doesn’t make it any less of a judgment. If Alice were to confine her comments to a description of Jorge’s behavior, avoiding judgment, she might say: “I really felt embarrassed when you said what you did to Irene.” That’s an effort to describe Jorge’s behavior without judging it.

Here is Peter’s attempt to send an “I” message:

I’m upset when the toys are left on the floor. I really need calm and order when I first get home from work.

He takes responsibility for his feelings by saying “I’m upset,” rather than “You are upsetting me.”

He tries to communicate a feeling rather than a judgment with “I’m upset” rather than “You’re not keeping the kids under control.”

He describes a behavior rather than judging it: “when the toys are left on the floor” instead of “when everything is so messy.”

And he expresses what he needs: “I really need calm and order when I first get home from work.”

To put it another way, you can construct an “I” message as follows:

“I” messages do not automatically bring about the result you want. People may still feel upset, hurt, or angry even when you send a good “I” message. Your job is to express your feelings in ways that minimize the risk that the other person will feel the need to react defensively. Their feelings are their own responsibility. If both people send “I” messages, you’ll significantly reduce the risk of a fight, or speed the recovery if you are both upset. 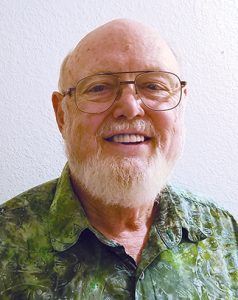 James L. Creighton, PhD, is the author of Loving through Your Differences and several other books. He has worked with couples and conducted communications training for nearly 50 years around the world. Visit him online at www.jameslcreighton.com.

Excerpted from the book Loving through Your Differences. Copyright ©2019 by James L. Creighton. Printed with permission from New World Library — www.newworldlibrary.com.