Don’t Be a Jerk

An Excerpt from Brad Warner

It used to be that nobody outside the worlds of stuffy academics and nerdy Zen studies knew who Do-gen was. And while this thirteenth-century Japanese Zen master and writer is still not one of the best-known philosophers on the planet, he’s well-known enough to have a character on the popular American TV series Lost named after him and to get referenced regularly in books and discussions of the world’s most important philosophical thinkers.

Unfortunately, in spite of all this, Do-gen still tends to be presented either as an inscrutable Oriental speaking in riddles and rhymes or as an insufferable intellectual making clever allusions to books you’re too dumb to have heard of. Nobody wants to read a guy like that.

You could argue that Do-gen really is these things. Sometimes. But he’s a lot more than that. When you work with him for a while, you start to see that he’s actually a pretty straightforward, no-nonsense guy. It’s hard to see that, though, because his world and ours are so very different.

A few months ago, my friend Whitney and I were at Atomic City Comics in Philadelphia. There I found The War That Time Forgot, a collection of DC comics from the fifties about American soldiers who battle living dinosaurs on a tropical island during World War II, and Whitney found a book called God Is Disappointed in You, by Mark Russell. The latter was far more influential in the formation of this book.

The publishers of that book, Top Shelf Publications, describe God Is Disappointed in You as being “for people who would like to read the Bible…if it would just cut to the chase.” In this book, Russell has summarized the entire Christian Bible in his own words, skipping over repetitive passages and generally making each book far more concise and straightforward than any existing translation. He livens up his prose with a funny, irreverent attitude that is nonetheless respectful to its source material. If you want to know what’s in the Bible but can’t deal with actually reading the whole darned thing, it’s a very good way to begin.

After she’d been reading God Is Disappointed in You for a while, Whitney showed it to me and suggested I try to do the same thing with Shōbōgenzō: The Treasury of the True Dharma Eye. This eight-hundred-year-old classic, written by the Japanese monk Eihei Do-gen, expounds on and explains the philosophical basis for one of the largest and most influential sects of Zen Buddhism. It’s one of the great classics of philosophical literature, revered by people all over the world. However, like many revered philosophical classics, it’s rarely read, even by those who claim to love it.

I immediately thought it was a cool idea to try to do this with Shōbōgenzō, but I didn’t know if it would work. I’ve studied Shōbōgenzō for around thirty years, much of that time under the tutelage of Gudo Wafu Nishijima. Nishijima Roshi was my ordaining teacher, and he, along with his student Chodo Mike Cross, produced a highly respected English translation that was for many years the only full English translation available. I had already written one book about Shōbōgenzō, called Sit Down and Shut Up (New World Library, 2007), and had referenced Shōbōgenzō extensively in all five of my other books about Zen practice.

My attitude toward Shōbōgenzō is somewhat like Mark Russell’s attitude toward the Bible. I deeply respect the book and its author, Do-gen. But I don’t look at it the way a religious person regards a holy book. Zen Buddhism is not a religion, however much it sometimes looks like one. There are no holy books in Zen, especially the kind of Zen that Do-gen taught. In Do-gen’s view everything is sacred, and to single out one specific thing, like a book or a city or a person, as being more sacred than anything else is a huge mistake. So the idea of rewriting Do-gen’s masterwork didn’t feel at all blasphemous or heretical to me.

But Shōbōgenzō presents a whole set of challenges Russell didn’t face with the Bible. The biggest one is that the Bible is mainly a collection of narrative stories. What Russell did, for the most part, was to summarize those stories while skipping over much of the philosophizing that occurs within them. Shōbōgenzō, on the other hand, has just a few narrative storytelling sections, and these are usually very short. It’s mostly philosophy. This meant that I’d have to deal extensively with the kind of material Russell generally skipped over.

Still, it was such an interesting idea that I figured I’d give it a try. My idea was to present the reader with everything important in Shōbōgenzō. I didn’t summarize every single line. But I have tried to give a sense of every paragraph of the book without leaving anything significant out. While I’d caution you not to quote this book and attribute it to Do-gen, I have tried to produce a book wherein you could conceivably do so without too much fear of being told by someone, “That’s not really what Do-gen said!” Obviously, if a line mentions Twinkies or zombies or beer, you’ll know I’ve done a bit of liberal paraphrasing. I have noted these instances, though, so that shouldn’t be too much of a problem. 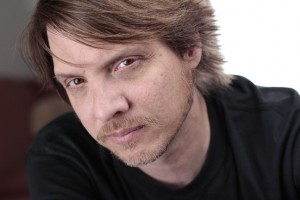 Brad Warner is the author of Don’t Be a Jerk and numerous other titles including Sit Down & Shut Up, Hardcore Zen, and Zen Wrapped in Karma Dipped in Chocolate. A Soto Zen priest, he is a punk bassist, filmmaker, Japanese-monster-movie marketer, and popular blogger based in Los Angeles. Visit him online at www.hardcorezen.info.

Excerpted from Don’t Be a Jerk ©2016 by Brad Warner.  Published with permission of New World Library. http://www.newworldlibrary.com