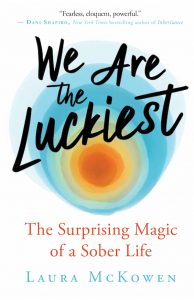 An excerpt from We Are the Luckiest by Laura McKowen

Before Laura McKowen got sober, she had a long, successful career in public relations in the Mad Men-esque drinking culture of the advertising industry, where “liquid lunches were frequent and drinking at your desk in the late afternoon was perfectly normal.” In the five years since she stopped drinking, she has become one of the foremost voices in the modern recovery movement.

In her new memoir We Are the Luckiest: The Surprising Magic of a Sober Life (New World Library, January 7, 2020), McKowen flips the script on how we talk about addiction and encourages readers not to ask, “Is this bad enough that I have to change?” but rather, “Is this good enough for me to stay the same?”

We hope you’ll enjoy this excerpt from the book.

For so long, all I could see was what I would be losing by giving up drinking — love being only one representation of many. Despite all the aphorisms and positive thinking and stories I’d heard from other sober people promising me otherwise, all I could feel was the loss. Augusten Burroughs, in his book This Is How, said that what worked for him in getting sober was to find something he loved more than drinking. I understood that intellectually, and it sounded awfully catchy and inspiring, but it just didn’t feel true for me.

Being in that room with Seane, feeling whatever had been sparking up in me — even in the midst of all the emotional angst and discomfort — I started to get it. For the first time, I could imagine chasing something bigger.

Here’s what is true, for you and for me: the grief and the sadness are real. When you give up something you’ve relied on as heavily as I relied on alcohol, even when that something is actively destroying your life, it is a true loss. You can’t deny that, and more importantly, you don’t have to.

I thought there was something wrong with me for feeling so heartbroken. How could I actively miss a thing that had nearly cost me everything, including Alma?

There was nothing wrong with me, though. Alcohol had been my friend. It had carried me through a lot of pain I might have otherwise not been able to withstand. It had softened experiences that needed to be softened. It had been there for me always, without question. My drinking — and whatever it is you do to feel better — was born of a natural impulse to soothe, to connect, to feel love. And although alcohol hadn’t actually delivered those things, it was absolutely yoked to them in my mind. In my heart and body, too. It was just what I knew.

So of course I was terrified without it. Of course I missed it. The absence of it was terrible. And necessary. Maybe it’s helpful to linger there for a minute, in the terrible and the necessary. To start to see them as the same. Maybe in this way, pain is not such a problem.

When I saw Seane up there, doing what she did, I realized it wasn’t in spite of her pain that she was doing these things but because of it. She knew exactly what it took to walk through the fire. That is what I recognized in her. That was why I believed her.

Because that strength was in me, too.

I had always quashed my pain and cut it off before it could burn all the way through. I drank it away or ate it away or disappeared into another person or work. Being there over those four days, without contact with Jon or Alma or the comforts of home, had given me a taste of what it was like to just let it burn. I felt it. I felt it all over my body. And although it was excruciating most of the time, there were a few moments when I surrendered the fight and simply allowed everything to wash over me. In those moments, I found that right alongside the sharp intensity and unease, there was some small part of me willing to stay, another voice softly saying, I am willing to be here.

Behind all those nos and never-agains is a much bigger yes. It might not seem clear now, but it will be clear soon. Listen to the voice. Listen to your body. This is in you already.

There is a life that is calling you forward, begging you to meet its eye, to glimpse its vision for you. You can get only so far by running away from what you do not want. Eventually you will have to turn toward what you do. You will have to run toward a bigger yes. 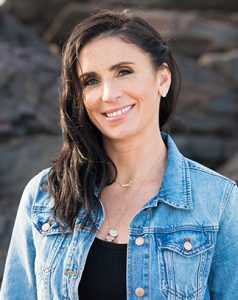 Laura McKowen is the author of We Are the Luckiest. She is a former public relations executive who has become recognized as a fresh voice in the recovery movement. Beloved for her soulful and irreverent writing, she leads sold-out yoga-based retreats and other courses that teach people how to say yes to a bigger life. Visit her online at http://www.lauramckowen.com.

Excerpted from the book We Are the Luckiest. Copyright ©2020 by Laura McKowen. Printed with permission from New World Library — www.newworldlibrary.com.