“The Four Friends” is an ancient fable that the Buddha repeated to teach the value of respect for one another. The lesson we can learn from this is that when there is harmony, there is also happiness.

Long, long ago, there was a pheasant would eat fruit, and then spit out the seeds. A small sapling grew from one of those seeds. That sapling then grew into a small tree that bore fruits, and the pheasant happily ate them.

Then, as the tree grew bigger, since the pheasant had difficulty flying, he could no longer reach the fruit.

A rabbit arrived, and said to the pheasant: “Neither of us can reach the fruit. Let me lift you so you can pluck the fruits, and we can share them.” The pheasant agreed, and the two enjoyed the fruits of the tree.

As the tree grew bigger, the fruit became out of their reach.

But then, the tree grew even bigger still.

Finally, an elephant arrived on the scene, and joined in to help the other three. The elephant lifted the monkey, the monkey lifted the rabbit, and the rabbit lifted the pheasant. Now, however high the tree grew, they could always reach the fruits!

These four friends became good examples to others in the forest. The bird taught other birds to be good. The elephant taught those with fangs to help others, and the rabbit taught the creatures with paws to do their part, and the monkey taught those with fur to do good for others. Eventually, the small group influenced even human beings by their example of cooperation, despite differences in size, strength or even species. By working together, the four friends learned the value of unity, integrity, friendship, generosity, and selflessness for the greater good.

The Four Friends, or Thumpa Punshi, is a familiar theme in paintings, curtains, thangkas and walls in Buddhist temples and homes. It is thought that wherever this picture is displayed harmony will increase. The picture acts as a reminder of how we should stay together and help each other. We all have various strengths and challenges, and yet we can complement one another to accomplish those things that we cannot achieve alone. 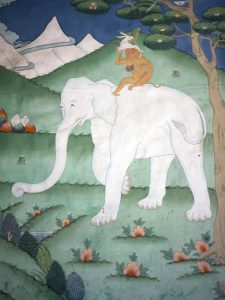 The Four Friends. I got this picture from allposters.com – I have a canvas print hanging in my home!

“Respect should be freely given to all simply because all have Buddha-nature, because all can become Buddhas.” – Stonepeace