The Waterhorse No ratings yet.

Set in Loch Ness, Scotland, this is the story of the Loch Ness Monster, or one man’s interpretation of the events that happened around the time of the famous photo of it.  It’s the story of a boy and his pet, really.  A love story, one of loyalty and friendship.  The boy finds an egg, discovers the creature inside, and they bond.  Set amidst war, this relationship is complicated by the various people who impose themselves into the boy’s home.  The sad mother, with her husband lost in battle, doesn’t know how to comfort the boy.  The Waterhorse, as he is identified by the groundskeeper, brings the boy out of his own shell, and allows him to conquer his fears.  In the process, the family grows together once again.  A beautiful movie for the whole family.  Some scenes may be scary for younger viewers – when the waterhorse is in danger and gets angry. 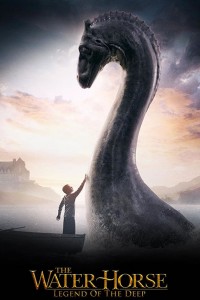 A lonely boy discovers a mysterious egg that hatches a sea creature of Scottish legend.

A lonely boy discovers a mysterious egg that hatches a sea creature of Scottish legend.

Tagline: How Do You Keep A Secret This Big?
Genres: Fantasy, Adventure, Family