The Fountain No ratings yet.

“The Fountain” has been on my radar for awhile now – my son, Freddy, the film student, is a big Darren Aronofsky fan and he told me about this movie ages ago. Then I started to see previews, and hear the buzz, and it sounded right up my alley so I was really looking forward to seeing it. Greg and I went opening night, we couldn’t wait! And I’m so glad we did. This is the kind of movie you want to go back and see a few times. There are so many layers, it’s so rich, so deep. I think this is going to be a classic, a movie that will live on in film history the way so many others have. The Fountain is a remarkable in its beauty, in its originality, and in its theme. You really have to pay attention, there are so many symbols and messages throughout.

Hugh Jackman, one of the most versatile actors of this generation, is “Tom” in three different forms, in three different lifetimes… or is it all the same lifetime? The movie opens up so many questions, and really forces the audience to think. Rachel Weisz plays “Izzie,” his wife, who in the present-day incarnation is suffering from a brain tumor. Present day Tom, a brain surgeon, struggles to find a cure for her. Rachel Weisz has a wonderful quality about her. In this role she’s down-to-earth and real, and yet almost ethereal. She and Hugh Jackman make a beautiful couple, their chemistry is amazing.

Interestingly enough, these two actors weren’t the ones originally cast in the film. Brad Pitt and Cate Blanchett were set to star, but because of delays in production and Cate’s pregnancy, the timing didn’t work out. Aronofsky saw Jackman onstage in “The Boy from Oz” and was duly impressed. Backstage he asked the actor what his next project was, and Jackman wryly replied: “An Aronofsky film, I hope!” Jackman pushed for Weisz, Aronofsky’s wife, to co-star. The couple had agreed not to work together, but Weisz was enamored with the script and wanted the role. For the duration of filming they lived apart so that they weren’t each bringing work home with them. I can’t imagine better casting. Hugh Jackman deserves a nomination for his performance. This is his best work yet.

I just love the story, and the ideas that it brings up. These will stimulate many conversations for the car ride home when people leave the theatre. Life, death, youth, survival, love, commitment, time, choices… these are huge issues that aren’t often dealt with in the movies these days. I love the art direction, The Fountain is a beautiful movie just to look at! This is definitely a movie worth seeing, and maybe seeing a few times. 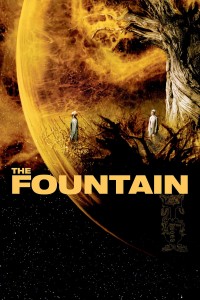 Spanning over one thousand years, and three parallel stories, The Fountain is a story of love, death, spirituality, and the fragility of our existence in this world.

Spanning over one thousand years, and three parallel stories, The Fountain is a story of love, death, spirituality, and the fragility of our existence in this world.