The Duchess No ratings yet.

Based on a true story, The Duchess stars Keira Knightley in the title role.  She’s still a teenager when she is married off to The Duke of Devonshire, played by Ralph Feinnes.  She has stars in her eyes, and thinks he loves her, but it becomes apparent that all he really wants from her is a male heir.  After two daughters and a couple of miscarriages, the Duke becomes impatient, and goes back to being what we would call today “a player.”

Our heroine has a big heart, and she consoles herself with her political interests, and friends.  One friend in particular becomes her rival.  Another becomes her lover.

This woman had a challenging, and interesting life – and all while being a fashionista!  The costumes are amazing.  Keira Knightley is perfect for this part, and I wouldn’t be surprised it she has earned herself an Academy Award nomination.  Ralph Feinnes is excellent as well – debonair, yet cold, and sometimes cruel.  Compelling story – just a little bit long. 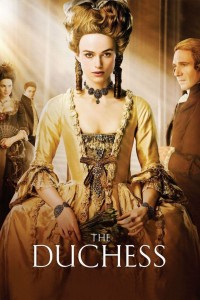 A chronicle of the life of 18th century aristocrat Georgiana, Duchess of Devonshire, who was reviled for her extravagant political and personal life.

A chronicle of the life of 18th century aristocrat Georgiana, Duchess of Devonshire, who was reviled for her extravagant political and personal life.