The Curious Case of Benjamin Button No ratings yet.

The Curious Case of Benjamin Button is truly original.    Brad Pitt stars as a man who is born old in a baby’s body.  As the years go by, he grows younger.  The whole theme is about time, and the relativity of time, and how we move through time – or how time moves through us.

We start in a hospital room in New Orleans.  A dying old woman gives her daughter an old journal to read to her.  It’s the life story of Benjamin Button.  The movie goes back to this hospital room as the story progresses.

Baby Benjamin is abandoned by his father when his mother dies in childbirth.  But he finds a home in an old-folks home where he fits right in.  It’s an untraditional family, but he thrives, learns and grows.  It is here that he meets Daisy, the granddaughter of a resident.  She’s a young girl, and they immediately form a connection.  As Daisy gets older, and Benjamin gets younger, their lives come together for a short period of time. Cate Blanchett plays Daisy with much grace.  Daisy is a dancer, an artist who expresses herself unabashedly.  She’s curious, and drawn to this mysterious man she can’t possibly understand.

The movie is a little bit magical.  We have to suspend disbelief, and put ourselves in Benjamin’s world.  But the pace is slow, and the movie runs long – about 2 hours 45 minutes. 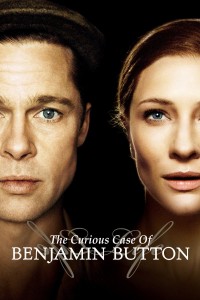 The Curious Case of Benjamin Button (2008)

Tells the story of Benjamin Button, a man who starts aging backwards with bizarre consequences.

Tells the story of Benjamin Button, a man who starts aging backwards with bizarre consequences.