Sweeney Todd No ratings yet.

Tim Burton, Stephen Sondheim and Johnny Depp – what a combination!  And wow, does it work!  It’s a stroke of genius to have Tim Burton direct the movie version of the popular long-running stage show, Sweeney Todd.  It’s the most macabre musical ever.  The story is of a barber, going by the name of Sweeney Todd, who has gotten out of prison years after being falsely accused.  Upon his release, he returns to London to seek revenge on those who ruined his life.  He does so by killing them with his barber’s blade!  The landlady, Mrs. Lovett, is infatuated with Mr. Todd and becomes his accomplice, making meat pies out of the bodies. Some interesting side stories going on which help to propel the action.  The lighting, costumes, make-up, sets, all spectacular.  The songs are amazing.  Johnny Depp can sing!  Helena Bonham Carter is Mrs. Lovett, a role played by Angela Lansbury on Broadway.  She is awesome, so convincingly smitten and dysfunctional, and gothicly (is that a word?) beautiful.  Tim Burton fans will absolutely love this movie.  Just be prepared, there’s a lot of blood, neon, splattering, all over the place.  The whole thing is so original, bizarre and creative – a must for future filmmakers.  It’s rated R for all the violence, definitely not for young kids, even if they’re Johnny Depp fans. 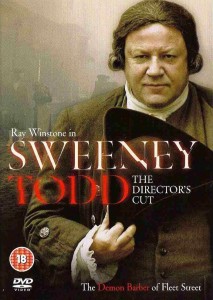 A barber goes on a killing spree... and then enlists a baker for even more gruesome acts.

A barber goes on a killing spree... and then enlists a baker for even more gruesome acts.