Seven Pounds No ratings yet.

Seven Pounds is actually a lot heavier than seven pounds – more like fifty.  Will Smith plays a man who has a big weight on his conscience.  He is having a hard time living with himself so he decides to make other people’s lives better.  I don’t want to give too much away, because the plot unfolds throughout the movie, and you’re really not sure exactly what is happening until the very end.  We see Will in yet another super-human type of role, just like Hancock or I Am Legend or even The Pursuit of Happyness where it’s kind of Will against the world.  He’s good at this, but it’s getting a little old.

Rosario Dawson is the love interest, and she’s dying.  Sad.  But she’s pretty even when she’s sick.  It’s her heart.  She has this big dog, and there’s all kinds of bonding time with Will and the dog.  And Will fixes her old printing press, very romantic.

Very interesting movie, lots of “what if” conversation afterwards. 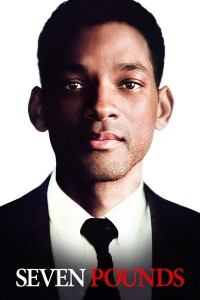 An IRS agent with a fateful secret embarks on an extraordinary journey of redemption by forever changing the lives of seven strangers.

An IRS agent with a fateful secret embarks on an extraordinary journey of redemption by forever changing the lives of seven strangers.