Prime No ratings yet.

Sweet movie, with great characters, but lacking in depth because the subject doesn’t really sustain a feature film. This would have been better off as a TV movie – maybe an hour and a half long once you cut out the commercials. “Prime” refers to the sexual prime that both divorcee Raffi, played by Uma Thurman, and her new boyfriend, the much younger David, are both in. Meryl Streep plays David’s mother, who also happens to be Raffi’s therapist. If you’ve seen the trailers, you’ve basically seen the movie. All of the actors are good, and the writing is sharp – it’s just that it’s ultimately unsatisfying. You’re left to feel like nothing really happened. Ok- some issues were explored, and the characters got to know themselves better as people, but is that enough to make you feel like you had a good time at the movies? I was hoping for more. 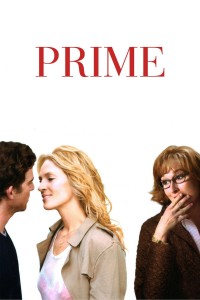 A career driven professional from Manhattan is wooed by a young painter, who also happens to be the son of her psychoanalyst.

A career driven professional from Manhattan is wooed by a young painter, who also happens to be the son of her psychoanalyst.