Mad Money No ratings yet.

Diane Keaton is the mastermind behind a plot to take money from the Federal Reserve.  Her idea is that this is a victimless crime, the money is scheduled to be destroyed anyway, so no one will miss it.  Her husband is out of work, and she’s about to lose her home, so as the Reserve’s new janitor she has access to the cash.  Her accomplices are two equally financially needy women – Queen Latifah and Katie Holmes.  It is refreshing to see women in a movie with the savvy to pull off a comedy crime caper.  And the results are as expected.  Zaniness ensues, the girls get caught, they atone, and live happily ever after.  Fun date movie with lots of laughs, but nothing much new. 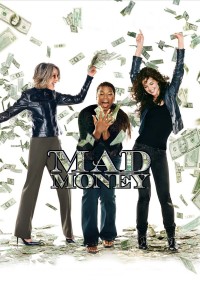 Three female employees of the Federal Reserve plot to steal money that is about to be destroyed.

Three female employees of the Federal Reserve plot to steal money that is about to be destroyed.