King Kong No ratings yet.

I wish I could get excited about King Kong – I mean, after all the build up, it would be nice to have a real blockbuster come out for Christmas. But, sadly, I found it disappointing. Mainly because it’s 3 hours long and about an hour could have easily been edited out and not even noticed. The original King Kong clocked in at a little over an hour – and this one is supposed to be true to the original…. uh, don’t think so. The ads and previews all make this King Kong seem like an adventure movie – but in the first half hour we are warned by one of the characters: “This is not an adventure movie” and he’s right. It’s a horror movie, through and through. Be prepared for a King Kong vs. Godzilla scene that could be a movie itself – then there are the giant slugs which swallow people whole head first, and the demonic looking bats. A bit too gruesome if you ask me. The movie takes risks, that’s for sure. It’s just that sometimes the risks just don’t pay off. Other than that, well… Peter Jackson got some great moments on film. The movie is BIG, as big as its title character. Jack Black seems like an odd choice to play Denham, the director who gets everyone into this mess in the first place. Black kind of mugs his way through the film, making it all a little too put on, and unreal. Maybe that was the intention? Not sure, it just felt out of place next to Adrien Brody’s very real and brooding screenwriter and Naomi Watts’ sensitive and desperate ingenue, Anne Darrow. Kyle Chandler’s credit isn’t near the top of the list – but he is wonderfully funny and fresh as the egotistical actor cast opposite Anne in the movie, Bruce Baxter. You may recognize Chandler from the series “Early Edition” which aired on CBS in 1996. He played Gary Hobson, who is visited every morning by a mysterious cat and tomorrow’s newspaper. It was a great series, and I always liked Chandler. It’s good to see him on the big screen and I hope this is a big break for him. Older kids who are real movie-philes and can sit through 3 hours (plus the now-standard 20 minutes of ads and previews) may get a kick out of it. Otherwise, thank goodness we have lots of movie-going options this holiday season. 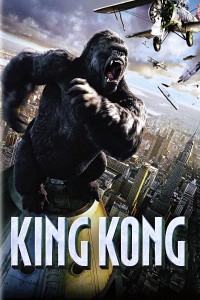 In 1933 New York, an overly ambitious movie producer coerces his cast and hired ship crew to travel to mysterious Skull Island, where they encounter Kong, a giant ape who is immediately smitten with leading lady Ann Darrow.

In 1933 New York, an overly ambitious movie producer coerces his cast and hired ship crew to travel to mysterious Skull Island, where they encounter Kong, a giant ape who is immediately smitten with leading lady Ann Darrow.