Juno No ratings yet.

I really like this movie.  Juno the character is a sixteen year old girl who finds out she is pregnant.  She’s not your typical movie teen who freaks out, she handles the news rather pragmatically.  She may not have been savvy enough to prevent the pregnancy in the first place, but she’s smart and mature enough to deal with the consequences and make some bold decisions all on her own.  Ellen Page plays Juno and she is brilliant in the role.  Michael Cera plays the baby’s father, naive and smitten, and clueless as to how to handle this situation so he follows Juno’s lead.  Alison Janney plays Juno’s stepmother, and she is hilarious – so funny and with the best of intentions, a real character with genuine emotion.  Juno meets a childless couple who wants to adopt, Jennifer Garner and Jason Bateman.  They look like the requisite yuppy twosome, but there are issues beneath the surface that Juno witnesses.

The writing is top-notch.  The characters well drawn and relatable.  This is a terrific movie, that is sure to generate discussion among parents and teens. 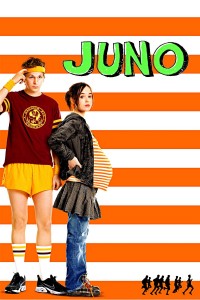 A young girl named Juno gets herself pregnant and tries to stand on her own. She soon learns a few lessons about being grown up.

A young girl named Juno gets herself pregnant and tries to stand on her own. She soon learns a few lessons about being grown up.

Tagline: A comedy about growing up... and the bumps along the way.
Genres: Comedy, Drama, Romance