Glory Road No ratings yet.

Based on a true story, Glory Road is set in the world of college basketball. Josh Lucas stars as Don Haskins, who is hired away from a high school girl’s basketball team to coach Texas Western. Emily Deschanel, from the TV show “Bones” plays his wife. The only other name actors in the whole movie are Jon Voight, as an opposing team’s coach, and Derek Luke, as one of the players on the team. I love true stories, and underdog stories, and make-a-difference stories, and Glory Road just has it all. It’s eye-opening to see the kind of discrimination that these young men faced as they were really changing the whole game of basketball. There are lots of great game scenes, and I found myself cheering out loud, I couldn’t help it! And there are great relationships – people learn and grow and that’s always great to see in a movie. This is a take the kids (probably 10 and up they’ll understand it) movie, that everyone in the family will really enjoy. There’s a lot to talk about afterwards, too. A little bit of violence, so be prepared. This isn’t a sticky sweet Disney movie, it just has a really happy ending. Be sure to stay through the credits. At the very end there are interviews with current players and people involved in the big game, including Don Haskins and Pat Riley – yes, that Pat Riley! It’s fascinating. 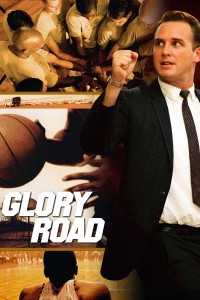 Tagline: The incredible story of the team that changed the game forever.
Genres: Drama