Friends With Money No ratings yet.

This is one of those movies where all the good parts are in the previews.  I was really looking forward to seeing Friends With Money – 4 of my favorite actresses star in it – and it came off in the previews looking sweet and heartwarming.  Nope.  It’s kind of sad actually.  Even depressing.  There are 3 Friends with Money, Joan Cusack, Catherine Keener, and Frances McDormand.  Who knows what brought these chicks together in the first place – that is never addressed.  Then there is the 1 Friend Without Money – Jennifer Aniston.  She’s pretty much a basket case – has a bad case of not knowing what she wants to be when she grows up and it surviving hand to mouth on her income as a maid and cosmetic samples.  The other friends don’t know if they should help, or how they should help, and meanwhile they’re all dealing with their own issues: depression, anger, a failing marriage, and various charity dinners.  The characters are well drawn and the acting is terrific – but the movie lacks in chemistry and movement – it doesn’t go anywhere.  And when it ends, it just kind of stops… it doesn’t have a nice neat ending.  I don’t like that at all. 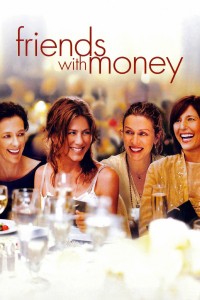 After she quits her lucrative job, Olivia finds herself unsure about her future and her relationships with her successful and wealthy friends.

After she quits her lucrative job, Olivia finds herself unsure about her future and her relationships with her successful and wealthy friends.