Freedom Writers No ratings yet.

Based on a true story about a school in Long Beach after the famous Los Angeles riots in the early 1990’s, Freedom Writers stars two-time Academy Award winning actress Hilary Swank.  Swank plays Erin Gruwell, a young teacher who takes on an freshman English class in a public high school that has its own share of problems.  Each student is faced with the challenges of dealing with racial tension and family stresses.  With patience and persistence, Erin is able to reach these students, and create a community in her classroom.  The students learn, thrive, and grow as people.  They end up writing about their experiences, and their essays were published into a book: “The Freedom Writers Diary.”  The movie is inspiring, and moving.  A must-see for high school students.  There were 3 boys sitting in front of us in the theatre, they told me that they are reading the book in their English class and that they really thought it was great.  They were there on their own, because they wanted to be.  Now that’s something. 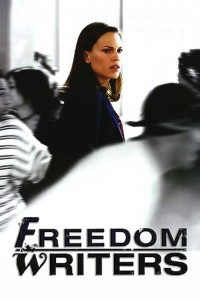 A young teacher inspires her class of at-risk students to learn tolerance, apply themselves, and pursue education beyond high school.

A young teacher inspires her class of at-risk students to learn tolerance, apply themselves, and pursue education beyond high school.

Tagline: Their story. Their world. Their future.
Genres: Crime, Drama