Elektra No ratings yet.

I had no expectations going in to see “Elektra.” As the mother of two teenage boys, I think I have seen every comic-book-turned-movie that has ever been made. Most of the time I end up leaving and shaking my head “never again.” But this time around I have to say that I was actually surprised. This Elektra is one cool chick! Score one for us girls!

Jennifer Garner, of TV’s “Alias” plays Elektra. She’s a troubled soul, with a shady past, a dark back-story typical of this genre. We first saw this character in another Marvel film, “Daredevil.” She supposedly died, but guess what? She was brought back to life by her Ninja Sensei! Elektra is beautiful (of course) and lives by her own code of conduct, trying to find her own way. She doesn’t fit in to “standard” society – and she doesn’t much mind given her OCD and other quirks. Yet she is emotionally caught off guard when she meets a handsome widower (Goran Visjnic) and his teenage daughter. The relationship that Elektra develops with this family helps her to work out some of her own demons and she ends up fighting some mighty nasty bad-guys in the process.

The special effects are pretty interesting. One of the bad guys has tattoos that comes to life; haven’t seen that one before! And oh, that fiery red costume – a girl can really kick some butt in that outfit!

If this movie does well, expect to see some sequels. I think we’ve seen the last of Ben Affleck’s “Daredevil” but with some decent box office returns, Elektra will live on! 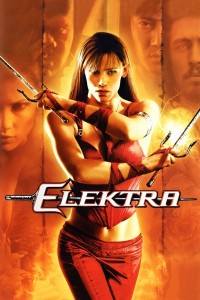 Elektra the warrior survives a near-death experience, becomes an assassin-for-hire, and tries to protect her two latest targets, a single father and his young daughter, from a group of supernatural assassins.

Elektra the warrior survives a near-death experience, becomes an assassin-for-hire, and tries to protect her two latest targets, a single father and his young daughter, from a group of supernatural assassins.