Dallas Buyers Club No ratings yet.

Dallas Buyers Club is based on the true story of Ron Woodroof, a small time rodeo rider.  It’s 1985 and Ron is a hard partying red-neck.  When he winds up in the hospital he gets diagnosed as HIV positive and is given 60 days to live.  At first  he goes about living those last days partying harder, but on the 59th day he finds a desire to live, and goes on a mission to recover.  He winds up in Mexico, on a regime of vitamins and drugs that are unapproved in the US.

When he starts improving, he comes up with the idea of selling these drugs back in the US by setting up a “club.”  Since he’s selling memberships rather than drugs he’s found a loophole.

Ron starts living the high life with all this new money.  He takes on a partner, a transsexual named Rayon played by Jared Leto.

At some point Ron is more about the cause than the money.  His life changes, and he changes.

Matthew McConaughey plays Woodroof, and there’s talk of an Oscar nomination for him. He lost a lot of weight for this role, he looks the part physically and it’s kind of creepy to see such a fit, healthy actor look so strung out and sick.

Good movie.  Worth seeing.  Some drug and sex scenes, not for the faint of heart. 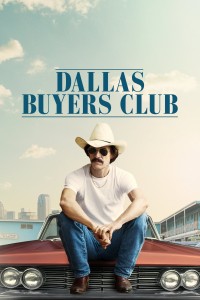 Loosely based on the true-life tale of Ron Woodroof, a drug-taking, women-loving, homophobic man who in 1986 was diagnosed with HIV/AIDS and given thirty days to live.

Loosely based on the true-life tale of Ron Woodroof, a drug-taking, women-loving, homophobic man who in 1986 was diagnosed with HIV/AIDS and given thirty days to live.

Tagline: Sometimes it takes a hustler to change the world
Genres: Drama, History