Brokeback Mountain No ratings yet.

Brokeback Mountain has to be the most talked about movie this season. Yes, it’s about two cowboys and their love for each other – but it’s about so much more than that. The movie is set in 1963 in Wyoming. Heath Ledger plays Ennis Del Mar and Jake Gyllenhall plays Jack Twist. Both are down-on-their-luck loners and they get to know each other when they take a job herding sheep on Brokeback Mountain. There are two pretty graphic love scenes, although if these were between a man and a woman we would think them to be tame. A bit intense, but older teens can handle it. Years go by as Ennis and Jack resume their lives in separate states. They each marry and have children, making homes for their families. When they reconnect four years later, the attraction is still there, and they both admit to the feeling of lack without the other in his life. Yet this is a “forbidden” love – and they fear the consequences of their relationship, so they find a way to be together when they feel they can be safe. Michelle Williams is brilliant as Ennis’ young bride. She discovers her husband’s secret by accident and although she is devastated, she silently endures her pain. Anne Hathaway is Jack’s socialite wife. This talented actress is much grown up since Ella Enchanted, and she plays this woman as cool and aloof. There is a lot to explore relationship-wise in this movie. The men’s relationship with each other, with their wives, with their fathers, with their children – all of these come into play. And then there’s the whole relationship with society, too. What is expected of us? How far must we go to conform? How far have we come as a society in our acceptance of people? Ang Lee directs, and the cinematography is beautiful. But what makes the movie is the relationship factor. It’s sad and heartbreaking and thought-provoking – and definitely worth seeing. Heath Ledger is amazing in this part – he’s already been nominated for a Golden Globe for his performance and I expect the Academy will give him a nomination as well. 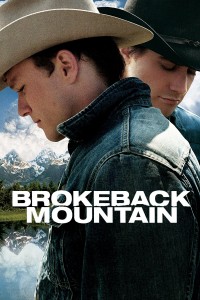 Brokeback Mountain is an Ang Lee film about two modern day cowboys who meet on a shepherding job in the summer of ’63. The two share a raw and powerful summer together that turns into a life long relationship conflicting with the lives they are supposed to live.

Brokeback Mountain is an Ang Lee film about two modern day cowboys who meet on a shepherding job in the summer of ’63. The two share a raw and powerful summer together that turns into a life long relationship conflicting with the lives they are supposed to live.

Tagline: Love is a force of nature.
Genres: Drama, Romance