Bewitched No ratings yet.

What a fun summer movie! Of couse, I’m a big “Bewitched” fan since I remember the original series on TV. But the show has a big following with the younger generation, too, from watching it on Nick at Nite. Freddy has seen almost every episode! There were 3 boys sitting in front of us, 2 high schoolers and 1 middle school aged brother, and they were there to see the movie because of Will Ferrell. And yes, they laughed at all of his antics! Nicole Kidman is our beloved Samantha – well, she’s really a witch named Isabelle who ends up playing Samantha on a re-make of the TV show. The movie is not about the TV show, but the making of the TV show with a big-ego star named Jack, played by Will Ferrell. And the bigger than life Shirley MacLaine plays Iris, an actress who happens to be a witch who is playing Endora, Samantha’s mother on the show. It sounds complicated, but it’s easy to follow, especially if you’ve ever seen the show because the characters are automatically familiar. Anyhow, Nicole is sweet and darling, and shows a fiery side when Isabelle is provoked. Great casting. And Will Ferrell is just goofball enough to make a convincing Darren/Jack. Michael Caine is wonderful as Isabelle’s dad, a Warlock looking out for his headstrong and befuddled daughter. All in all, good family fun. Light and silly and nostalgic. 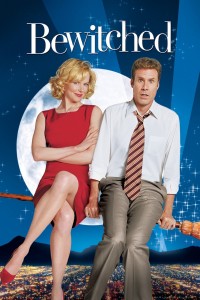 Thinking he can overshadow an unknown actress in the part, an egocentric actor unknowingly gets a witch cast in an upcoming television remake of the classic show "Bewitched".

Thinking he can overshadow an unknown actress in the part, an egocentric actor unknowingly gets a witch cast in an upcoming television remake of the classic show "Bewitched".