Babel No ratings yet.

I know that Babel is getting all the buzz right now, and it’s on lots of “Best” lists and has garnered nominations all over the place – but honestly, I didn’t think it was that great.  The locations are great, the cinematography is great – some of the acting is great – but the story is all over the place.  It tries to be like “Crash” and blend 3 seemingly unrelated stories together.  But Crash had a point, and it ended up making sense, and we cared about the characters.  In Babel we’re thrown into the action right away, and end up jumping around from one scene to another, one country to another, one storyline to another, trying to make sense of it all.

Brad Pitt and Cate Blanchett are the big names in Babel, and the ones on all the posters, but they are just part of a much larger ensemble cast.  They’re good, but these are not the best or most memorable roles they’ve played.  There are several actors who could have played these characters.  I think Brad and Cate were hired for their marquee value more than for what they bring to these particular characters.

There are a lot of holes in the story, a lot of questions that leave us hanging.  I just felt unsatisfied, depressed and exhausted after watching it. 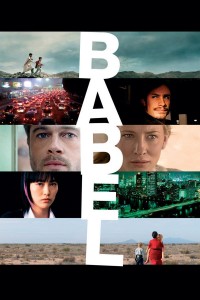 Tragedy strikes a married couple on vacation in the Moroccan desert, touching off an interlocking story involving four different families.

Tragedy strikes a married couple on vacation in the Moroccan desert, touching off an interlocking story involving four different families.

Tagline: If You Want to be Understood...Listen
Genres: Drama