Atonement No ratings yet.

I haven’t seen all of the movies of 2007 yet, but I have to say that Atonement is one of my favorites so far. It is a romantic tragedy, the story envelops you, haunts you. We start at a British estate, 1935. Two sisters prepare for company. The housekeeper’s son acts as a groundskeeper, and it is evident that he has feelings for the older sister, with whom he grew up. The younger sister is clearly smitten, but much too young for the young man. Keira Knightley plays the older sister, she is absolutely beautiful, with much going on behind those eyes and that smile. James McAvoy is amazing as her suitor, Robbie. As company arrives for the dinner party, there is much going on, and the younger sister misinterprets some of the shenanigans and falsely accuses Robbie of attacking a young girl. He is sent off to prison, and the story picks up 4 years later when he gets out, and is in the army. The sisters are both nurses. The two young lovers are trying to find each other. The younger sister, Briony, is having a crisis of conscience and trying to undo the events she set into motion.

The music is mesmerizing, the score so perfect for the action. And the costumes are breathtaking. Atonement has award-winner written all over it. A must-see. Some grizzly war scenes, so be warned.  My only criticism is that I would have liked a little more joy, a little more happy, before the two were thrown into such tragic circumstances. 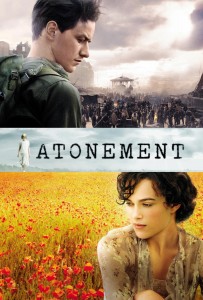 Fledgling writer Briony Tallis, as a 13-year-old, irrevocably changes the course of several lives when she accuses her older sister's lover of a crime he did not commit. Based on the British romance novel by Ian McEwan.

Fledgling writer Briony Tallis, as a 13-year-old, irrevocably changes the course of several lives when she accuses her older sister's lover of a crime he did not commit. Based on the British romance novel by Ian McEwan.