A Mighty Heart No ratings yet.

A Mighty Heart is based on the book of the same name by Mariane Pearl.  Mariane Pearl is a journalist, and the widow of journalist Daniel Pearl, who was murdered by terrorists in Pakistan.  This is her story, and it is heartbreaking.  Angelina Jolie becomes absorbed in the role of Mariane – Angelina is such a major celebrity, but she’s such a good actress that you actually forget it’s her playing the part.  And this is a tough part to play, with a huge range of emotions.  She’s guaranteed a Best Actress Oscar nomination.  The entire cast is wonderful, but it’s really Angelina’s movie.  The story is compelling, and although it mostly takes place within an apartment in Pakistan, the emotions drive the action and you find yourself holding your breath.  Yes, there is some violence, but most of it takes place off screen.  Teens can handle it. 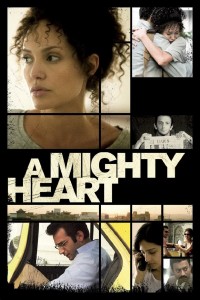 Based on Mariane Pearl's account of the terrifying and unforgettable story of her husband, Wall Street Journal reporter Danny Pearl's life and death.

Based on Mariane Pearl's account of the terrifying and unforgettable story of her husband, Wall Street Journal reporter Danny Pearl's life and death.