San Antonio Hill Country Hikers came through again with another fun
day. Bob and I left San Antonio at 7:10 a.m. and drove to Inks Lake
State Park two hours directly north of us.

State Park
Hwy 4 west from US 281 is a roller-coaster of a road, literally. As you
crest the first hill, you can’t see the bottom of the road. It is very
steep. The road goes up and down a number of times, not to mention the
tight 35 mph curvy section closer to the park entrance. Vehicles towing
RVs and boats beware!!

At
the park entrance gate, we showed our state park pass and were given a
vehicle window sticker for day use. We located the parking lot at the
trailhead and waited for more people to arrive.

Twenty people later we were off,
walking at a good clip along the green trail to Inks Lake. The
highlights of this hike were the wildflowers, the trails, lake views,
expansive granite outcrops and the cacti. However, there are a lot of
exposed areas, i.e., no shade. If you plan to hike here, be sure to put
on sunscreen and take lots of water! Start as early in the day as
possible if the temperature is going  into the 90-100 F. range.

The geology around Inks Lake dates back millenia and showcases
pre-Cambrian pinkish granite-like metamorphic rock called Spring Valley
Gneiss which was formed from re-crystallized sedimentary rock. The
sparkles in the rock come from feldspar minerals. Throughout our hike,
we crossed large areas of gneiss with the lovely little yellow stonecrop
succulents living in the vernal “pools.” These succulents thrive in
limestone, sandstone and granite. The yellow stonecrop lives in the
vernal (spring) depressions in the rock to absorb and use moisture
stored in the pools.

The trail is rated moderate. You must keep an eye out
for rocks and roots on the trail. Hiking poles would be a good trail
aid at this park.  The
view of Inks Lake was great from this viewpoint.

Here are photos from the first part of the hike.

If you ever watched the old TV series, the Addams Family, you will recognize the following…

With 5.9 miles under our belts, we drove to another
part of the park for a picnic lunch and a one mile hike to Devil’s
Waterhole swimming area. The weather was hot and humid. Bob could hardly
wait to get in the swimmin’ hole. I sat in the shade, took photos, and
avoided ants and mosquitoes. 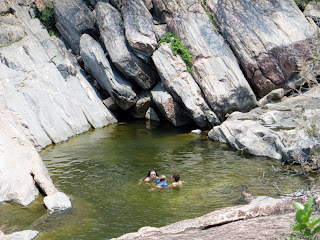 Bob said the rocks were very slippery! He had to be very careful.

As
you can see in the photo below, Bob enjoyed the jump into refreshing
lake water. After Bob’s first jump, a large group of people arrived who
were drinking beer, smoking and being obnoxious. The young men of the
group climbed to the top of the large rocks and leapt out over the lower
rocks for more of a rush. I’m happy I did not witness anyone hitting
the rocks on their way down! We left shortly after.

[An
aside: At some Oregon swimming holes, people die or become quadriplegic
after hitting rocks trying to jump from too high. One swimming hole in
Oregon, High Rocks, had to close to public swimming because drunk people
were climbing the trees on the cliffs and trying to jump out far enough
to miss the rocks. If they didn’t hit the rocks on the way down, they
hit the rocks under the water. Sad.]

Photo below is Bob jumping from the safer (lower)
height. To the left in the photo, you can see the edge of the bottom of
the rocks above.

Okay kids, don’t try this at home. Bob grew up in
Hawaii and has been jumping off cliffs into the water since he was seven
or eight years old.

With Bob refreshed and
reinvigorated, we headed about a quarter mile back to the car and called
it a day. As we drove toward US 281, we stopped so I could take a photo
of a castle on the hill. We had no idea what it was, so I Googled it.
You can read about Falkenstein Castle here.

Bob wanted to know how Inks Lake got its name so I
Googled that too. Inks Lake was named for Roy Inks, a Llano businessman
and mayor, who worked on funding to build a dam on the Colorado River to
provide power. The funding of the dam became an obsession for Inks
which resulted in him being named Director of the Lower Colorado River
Authority (LCRA). He died before the dam was completed. Because of his
efforts in securing monies for the dam, the lake was named after him as was one of the dams.