The drive to Hamilton Pool Preserve from Austin takes 40-45 minutes
and is really outside of Bee Cave, not Dripping Springs. We hoped we
would be one of the 75 cars allowed into the preserve. After the 75 cars
are in, for each car that leaves, one car can enter. That is how they
manage the property so it isn’t overrun with people.

When
we arrived at the entry gate, there were five cars ahead of us and they
were moving. Good sign. The entrance fee is $10 per car.

We
made it in and found parking under a tree. (In case you haven’t heard
me say it before, shade is a plus – as is a swimmin’ hole – when the
temperature is forecast to be 99Ã‚Â° F.)

We parked,
slathered on sunscreen, and headed down the quarter-mile trail to
Hamilton Pool. When we got there it was quite crowded on shore, but the
swimming hole is big enough to hold lots of people.

Being
that we were mighty hot, especially after hiking in, we immediately got
in the water. Brr! This pool is a lot cooler than the swimmin’ hole at
McKinney Falls. After we got in, though, it was quite pleasant and
refreshing to hang out in. We liked that we could swim either in the
shade or, if we got too cool, we could move over a few feet and be in
the sun.

After we cooled down and soaked our weary bones, we
hiked the trail through the natural grotto behind the swimming hole.
There is a trickle of a waterfall coming over the top, but not much.
People thought it was fun to sit where the water comes off the rock
above. 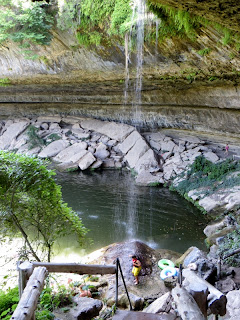 The family we had met at McKinney Falls yesterday was
here today. Their boys were dying to show us the big catfish close to
shore. The boys threw little dried leaves in the water and the catfish,
thinking the leaves were food, would come to the surface. A couple of
those fish were over a foot long. No fishing allowed in the Preserve.

A
park ranger was on duty at the swimming hole to make sure no one breaks
the rules. There are a couple of life rings on ropes that can be used
to rescue people from the deep parts of the pool. We stayed about an
hour, and then headed back to our lovely campsite at McKinney Falls.

Both
of us were exhausted from getting up early three days in a row, so we
napped away the afternoon. To prepare dinner, we made another campfire, ate roasted
hot dogs, coleslaw, left-over chicken breasts and cooked another veggie
skewer in a foil packet on the hot coals. For dessert, we wanted
S’mores but had run out of chocolate. Oh well, we’re mellow, we made
S’mores without the chocolate and they were good anyway.

We
had a wonderful time on our five-day getaway to McKinney Falls State
Park in Austin. It’s hard to believe all the things we crammed in, but
that’s why we chose this state park – it is very close to downtown
Austin so we could easily drive into town. The park is well maintained
and well patrolled by the park police and rangers.

Our only wildlife sighting was this morning; a skunk waddled through the dump station at the park.

Tomorrow, we head back to San Antonio.