(From August 1, 2012)   Last
night I was re-reading my blog from Cascade Canyon above Jenny Lake in
the Grand Tetons of Wyoming. I was aghast. Where were my photos?
Something was amiss.

After
re-reading the blog, I went, “Oh, yeah, I remember, we didn’t have
internet connectivity for any length of time and I posted I would
complete the blog and add photos ‘in a week or so.'” Well, blogger
friends, this is “the rest of the story,” as Paul Harvey used to say.

We
had a wet boat ride across Jenny Lake, luckily we snagged a seat under
the cover of the boat. By the time we arrived at the trailhead, the rain
had stopped. That was the last rain for the day!

This blog is going to be loaded
chock-full with pictures. Cascade Canyon is awesome and by far the most beautiful hike of all our Grand Teton/Yellowstone hikes.

The
first half mile took us uphill to Hidden Falls. Along the way,
novice rock climbers stopped to learn basics about climbing up
smaller rocks. Hidden Falls and Inspiration Point, both on
this trail, are the most popular destinations in Grand Tetons. We
expected the crowds at the lower elevations of these two destinations.
We were able to get uncluttered photos and even had willing
photographers to take a photo of us, together for a change. I should
mention that wildflowers are at their peak in early August. Love!

From Hidden Falls, the trail moved steeply upward, across a rock wall, to Inspiration Point. 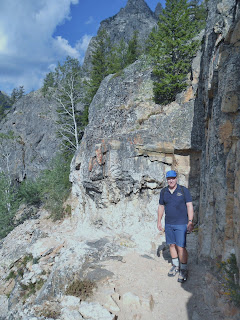 This
is as far as most people go, so it was crowded here with sightseers from the boat. Once we passed Inspiration Point, the crowds thinned
dramatically. The trail also leveled out and was a gradual grade for the
next 3.5 miles.

What a lovely day. No more threat of rain, although we
heard thunder one more time as the storm moved off to the east.

At this
point, pictures can do the “talking.” Just a few captions and notes
about what we saw.

This is Cascade Canyon–words barely do it justice.

[Note: If you want to see moose, come to Grand Teton National Park in
early August and hike the Cascade Canyon trail at 9:00 a.m. This first
moose (three photos) was about 10-20 feet from me right next to the
trail.] 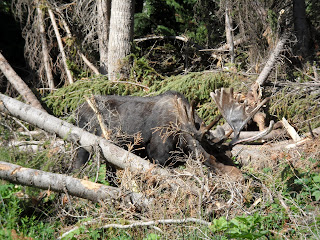 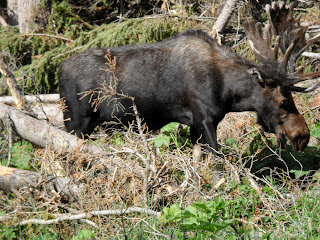 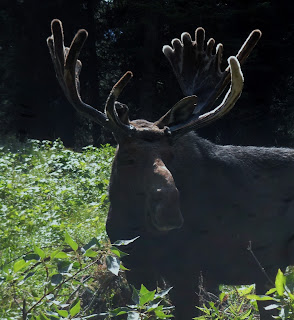 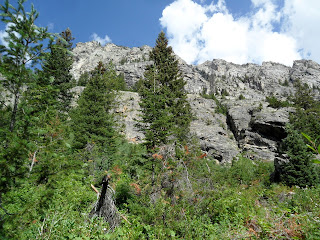 The following photo
was taken to show the scale of the mountains. You can barely see Bob
walking in the bottom center of the photo! 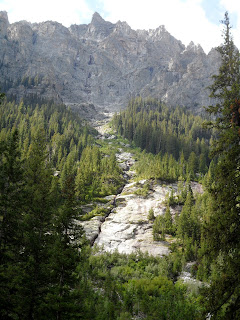 This is called Cascade Canyon because of many waterfalls that come down off the cliffs into the canyon. 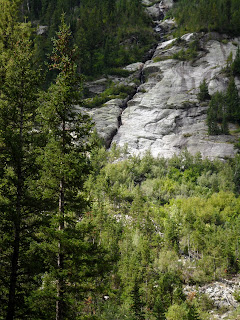 Moose #2: Classic moose pose–standing in the river
while eating. (We saw a total of three moose on this hike. The last
moose was lying down in the shadows surrounded by six people. I opted
not to try for another photo.)

As soon as Bob sat
down on a rock at Inspiration Point, the little beggar pictured below showed up at his
boot tip. I thought he was going to climb up Bob’s leg. We were going
to eat trail mix, but decided against it because of this guy. Obviously
people have been feeding all these chipmunks and squirrels.

And that was our
fantastic day of hiking 9.3 miles roundtrip in Cascade Canyon! I
recommend this hike for everyone. Once you get past Inspiration Point,
the trail is a breez