The American Buffalo once roamed the grasslands of North America in magnificent and vast herds. They became nearly extinct by a mix of commercial hunting, and mass slaughter in the 19thcentury and the introduction of bovine deceases from domestic cattle nearly finished them off. Fortunately they have recently made a comeback in a few national parks and reserves. 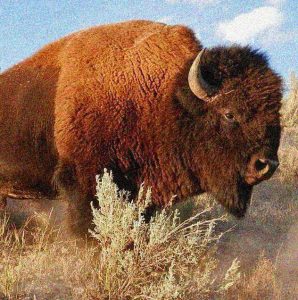 The American Buffalo is the national mammal of the United States, and so it should be.

I love to think of animals as our guides in life. We so often miss what they are trying to tell us. When we use Totem Animal Spirit, it connects us to our ancestry, the earth and the ancient symbols we’ve lost through modernism.

There’s nothing wrong with progress or modernism. It’s just not enough to fill the deep well of our consciousness that is tethered to our beginning and to the journey toward home.

As with all symbols, we have an opportunity to sit and contemplate a richer definition that can inform us in a swift and gently way, enlightening us as we sit quietly. Symbols take us into the fabric of our creativity and knowing.

Native Americans have always considered Buffalo a power animal. When we contemplate with Buffalo we are asked to walk a more sacred path and to engage with Mother Earth and Father Sky.

Buffalo brings prosperity to those that have an open heart and seek to live in harmony with all life in the universe. You really begin to know and live like Buffalo when all relationships are honored and kept as sacred and when you feel and express gratitude for all parts of your life and for all of creation.

The large head indicates great intellect and the horns reach toward the sky, hinting at a connection with higher thinking.

Buffalo will carry your burden if you are willing to give it up. The symbol of release is in the eyes of this brave and beautiful creature. Don’t hang on to what does not serve your highest good. 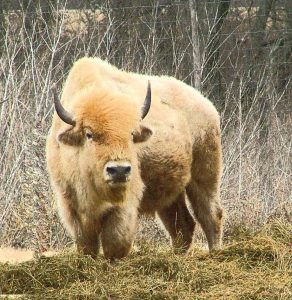 If you are burdened, close your eyes and see Buffalo. He/she is the symbol of caring and compassion, strength and power. You don’t need to say anything. Breathe and release. The Buffalo can carry the load. Lay it down, say thank you and carry on.