Alfred Hitchcock is probably my
all time favorite director, followed
closely by Billy Wilder.  I have enjoyed Hitchcock films my entire
life, both as a kid and later as a cinema student, when I learned more
about the man and his maverick techniques. 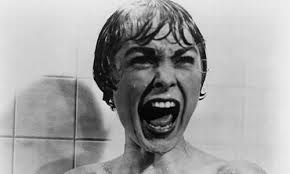 Hitchcock’s style was unique and
easily recognizable, so much so
that Mel Brooks tenderly paid homage to it in his film High Anxiety.
Hitch (as he was known to colleagues) pioneered numerous innovative
shooting and editorial techniques to create suspense. When asked howhe created suspense Hitchcock once said that seeing a bomb, for
example, then watching it explode did little in the way of creating
suspense. Instead, one creates suspense by cutting between the bomb set to go off, a
clock, and, say, the fearful eyes of the intended victim.He was able to do this byfirst, meticulously creating a storyboard depicting his shots,
scene by scene.

Also, by allowing our eyes to be
that of the camera and by moving slowlyaround his subjects, he engaged us in a form of voyeurism.
We felt the actors’ fear, their anxiety. And let me assure you, his characters
usually had much about which to feel fearful.

A common thread running through his films was that of a man
wrongly
accused of a crime (ie. The Thirty-Nine
Steps, Saboteur, The Wrong Man,
North by Northwest, and Strangers on a Train) and Hitchcock’s
experiences as a child came into play here. 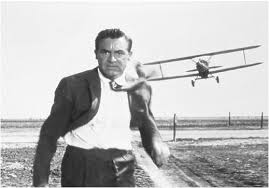 He apparently had a lonely, isolated
childhood, made worse by his
obesity. Lots of time for his imagination to grow and fester, I would imagine.When he was a child his father “punished” him by sending him to
the local police station with a note asking that he be “locked up for ten
minutes for his ”infraction”. This was undoubtedly done as a way to teach a lesson that wouldn’t be easily forgotten. If that was the case, it worked. It developed in Hitchcock a lifelong fear of being locked up and a distrust of the
police in general. His Jesuit upbringing influenced him as well and many of his films
dealt with religious, or at least morally ethical dilemmas (Vertigo, I
Confess). 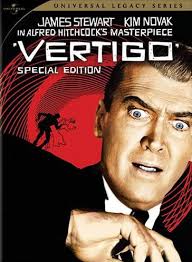 In
addition to his “man-on-the-run-having-been-wrongly-accused” themes,
Hitchcock’s films shared other similarities. Most of them starred “icy
blondes” such as Eva Marie Saint, Vera Miles, Doris Day, Grace Kelly
and Tippi Hedren, with Grace Kelly probably having been his personal
favorite. His daughter, Patricia, appeared in bit parts and his wife,
Alma, was the editor of most of his films. Another element common to his pictures was the use of well known places of interest such as The
Statue of Liberty in Saboteur, Mt. Rushmore
in North by Northwest, Royal AlbertHall in The Man Who Knew Too
Much and the Forrest Hills Tennis Stadium in Strangers on a Train.
(Incidentally, Robert Walker’s
performance as sociopath, Bruno Antony in this film, is chilling).

Hitchcock also
introduced what came to be known as the “MacGuffin”, vague,unimportant devices whose sole purpose was to move the story
forward.  Thesemight come in many forms ranging from a formula whispered by a
diplomat (Foreign Correspondent) to
hidden microfilm (North by Northwest),
to a bottle of wine containing uranium (Notorious).

It’s difficult to state my favorite Hitchcock film, I’ve
enjoyed so many. If pressed,
I would probably have to say that The Lady Vanishes, Shadow of
a Doubt, The
Man Who
Knew Too Much (the second version starring Jimmy Stewart and
Doris Day), and North by
Northwest are amongst my favorites. Hitchcock’s
unique blend of psychological suspense, sexual undercurrents, and ironic

humor are what made him an icon. (Though he never achieved an
Oscar for a

particular movie, he did ultimately receive a Lifetime Achievement
award).

Hitchcock’s “signature” was the cameo appearances he made in all
his
films. See if you can “find Hitch” by ithmatching the film below with the
scenein which he turned up.

"Registrar of Births
and Deaths”

*Note of trivia: The ad in question was for Reduco Obesity Slayer.

SCROLL DOWN FOR THE ANSWERS.

If you’d like to learn more about Alfred Hitchcock, I would
recommend reading “The Dark Side of Genius” by Donald Spoto. It’s the most comprehensive
book on Hitchcock I’ve read to date.