There have been many noteworthy Hollywood love affairs throughout
the years, but few as memorable nor as tragic as that of Clark Gable and Carole
Lombard.

Gable, “The King”, was an indisputable heartthrob in 1936,
the year he met Lombard at a Hollywood party.
At 35, he was married to his second wife when he became smitten with the
striking Lombard, who was seven years his junior and divorced from actor
William Powell.  The chemistry between
the two was mutual and grew even stronger once Gable was divorced.

Often described as devilishly handsome (in the 1938 film, Broadway Melody, a 14 year old Judy
Garland memorably crooned the song, You
Made Me Love You to a framed photo of Gable,) he was the man every woman
wanted to be with and every man wanted to be.
He was a man’s man.  For her part,
Lombard, blonde and leggy, starred in numerous screwball comedies and had that
unique combination of sexiness and a wicked sense of humor.  It’s been said that she swore like a sailor
and was known to play practical jokes whenever she had the opportunity.  By all accounts she was adored by film crews.

In January 1942, while returning from a tour to sell war
bonds, the TWA DC-3 in which Lombard had been flying, crashed into Mt.
Potosi, Nevada.  She and Gable had not
yet been married three years when her plane went down.

When Clark Gable arrived on the scene, he had to be
physically restrained from climbing the snowcapped mountain in an attempt to rescue
his wife.  His efforts would have been
fruitless since all twenty-two passengers abroad, including Lombard’s mother, had
died in the crash.

Gable sat on a stool at the nearby Pioneer Saloon, in
Goodsprings, drinking whiskey and smoking cigar after cigar as he waited to
hear the fate of his wife.  On a recent
trip to Las Vegas, I visited the saloon, which was built in 1913, and is the
oldest in So. Nevada. I looked at photos on display as I walked through a “memory
room” that has been created to honor Gable and Lombard.

Friends claimed that Clark Gable was never the same after
suffering this loss and in fact, when he died of a heart attack in 1961, his
fifth wife had him buried in Los Angeles’ Forest Lawn, next to Carole Lombard,
the love of his life.

Some love affairs are based in myth and some become the
prototype to which others aspire.  Gable
and Lombard’s love affair was the latter.

Ready to take a short quiz?
Can you correctly match up the famous relationships below?  Scroll all the way down for the answers when you’re done. 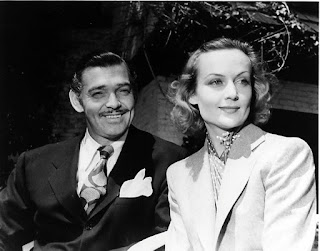 Hope
everyone enjoys a great weekend. (I’ll be editing the second draft of my newest
thriller.)  Whatever you do, have fun and
stay safe.