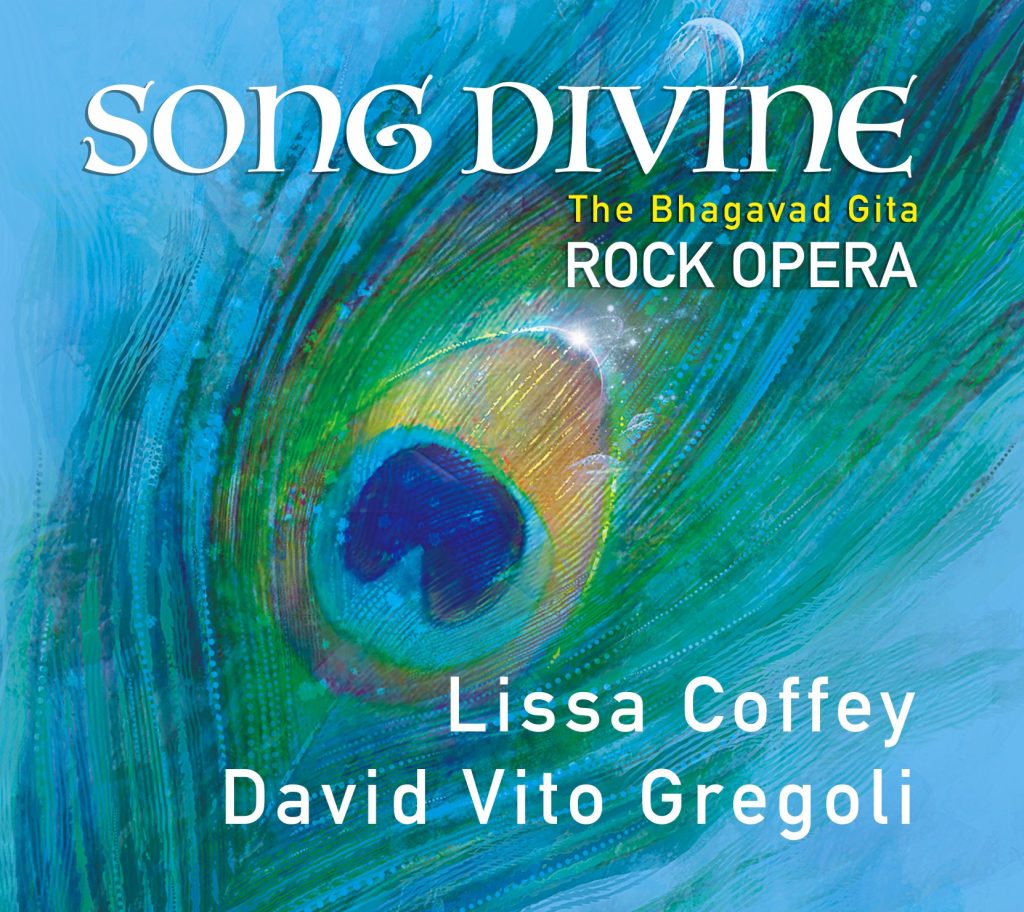 The Bhagavad Gita is the second-best-selling book and the second-most-translated book in the WORLD after the Bible. It was originally written in Sanskrit as a song, to be memorized and passed down through generations. When the Bhagavad Gita (Divine Song) is translated into English, it loses its rhythm and rhyme. Best-selling author and award-winning songwriter Lissa Coffey brought the beat back to the book with her lyrical, English language rendition of the Bhagavad Gita titled “Song Divine.”

Now, Lissa and producer Vito Gregoli have created “Song Divine: The Bhagavad Gita Rock Opera”. A collection of songs with a pop/rock vibe infused with Indian instruments and flavor. Each chapter of the Gita is a song, and each song is based on a traditional Indian rag.

This is a double album, with 18 songs and a bonus track.

About Song Divine the ROCK OPERA 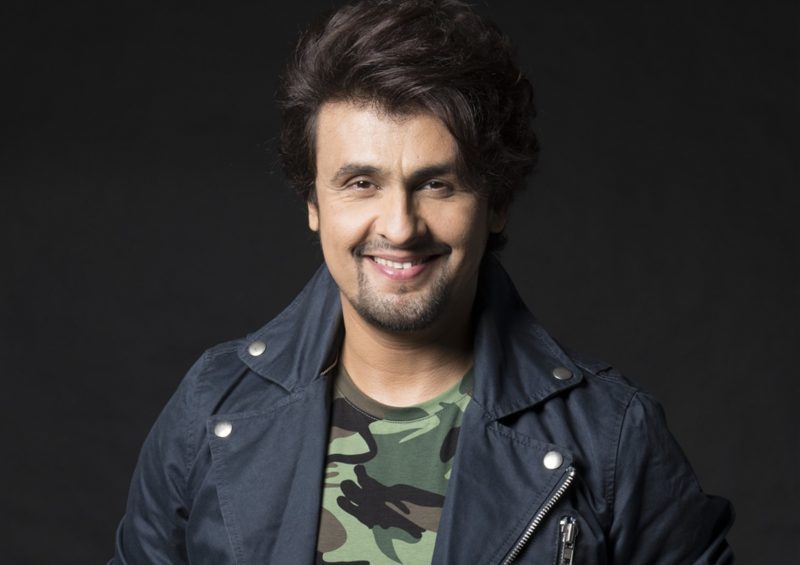 Print Out the Info >>

2. Know Who You Are- Sonu Nigam Vocals

5. Lotus in the Pond 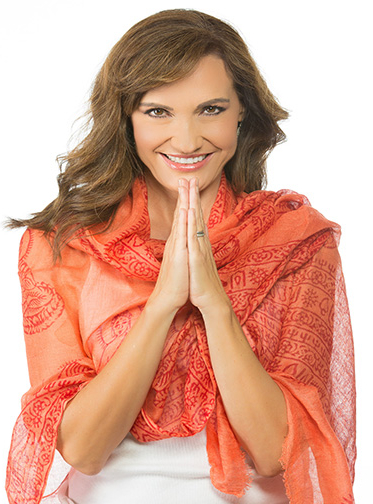 Lissa Coffey is an award-winning songwriter, as well as the author of Song Divine: A New Lyrical Rendition of the Bhagavad Gita. She is the founder of CoffeyTalk.com. Lissa is world renowned for her “Ancient Wisdom, Modern Style” philosophy. She has appeared on The Today Show, Good Morning America, HGTV, and many other national and local media outlets.

A best-selling author, Lissa has written several books, including the bestseller “What’s Your Dosha, Baby? Discover the Vedic Way for Compatibility in Life and Love.” Deepak Chopra says: “Coffey brings the timeless wisdom of Ayurveda to a contemporary audience and shows us how to discover more about ourselves and our relationships.”

Lissa is a long-standing member of ASCAP, NARAS, SAG/AFTRA and The Producer’s Guild (PGA). Her music videos have aired on Nickelodeon, Discovery Kids and The Learning Channel.

Lissa was honored with the Dharma Award from AAPNA for “Excellence in Promoting Awareness of Ayurveda.” She was awarded a commendation for the Mayor of Los Angeles for her “Outstanding Contribution to the Yoga Community.” She is a member of NAMA (National Ayurvedic Medical Association), and The Vedanta Society of Southern California.

Lissa Coffey has studied Ayurveda and Vedanta since 1996. Her education includes studies with: Deepak Chopra, Vasant Lad, David Frawley, Vaidya Mishra, and The Maharishi University of Management. She currently studies at, and is a member of, The Vedanta Society of Southern California under their head minister, Swami Sarvadevananda, who wrote the foreword to her book Song Divine. Lissa teaches Vedanta and the Bhagavad Gita worldwide both online and in spiritual centers. She is a certified instructor with The Chopra Center.

Lissa’s deep background in Vedic studies, along with her experience as a songwriter, teacher, and media personality makes her uniquely qualified to bring this new version of the Bhagavad Gita to the modern, western audience. Because it is poetic, and easy to understand, readers will be able to enjoy the spiritual lessons that are found in Lissa’s version of this iconic, ancient text. This is the first time the Gita has been presented in this way. With the growing popularity of yoga and meditation, the western audience is ready and hungry for it now. 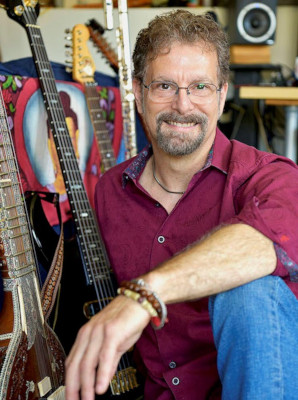 Song Divine’s composer and music producer David “Vito” Gregoli is blessed with an insatiable musical curiosity and expertise in multiple genres, from Pop to World and everything in between.

Recognized as a master ‘sound painter,’ Vito’s artistic signature is textured acoustic and synthesized compositions blending infectious grooves and exotic instrumentation from around the globe—but it’s his oxymoronic roots in Rock and Classical that bring an exciting freshness to everything he creates.

Whether as a player, composer, arranger or producer, Vito’s vast musical vocabulary enhances each project he touches. His diverse skills have been tapped by notable artists, such as New Age legend Constance Demby, Donna DeLory (Madonna), Indian vocalist Mala Ganguly (whose albums Bhajan Beats and Prana Gregoli produced) and Grammy-winner Ricky Kej, to name a few. He’s also worked on projects with Jon Anderson (Yes), Bill Champlin (Chicago) and Michael Manring (Windham Hill), and he once played for Ringo Starr (The Beatles). Vito co-produced and played on a track on Jai Uttal’s 2001 Grammy-winning album, and contributed his engineering skills to the 2016 Grammy-nominated “Love Language” by his good friend, Grammy-winner Wouter Kellerman.

Vito recently shared the stage with Ricky and Wouter in a live performance of a piece from their Grammy-winner “Winds of Samsara,” and he was honored to work on a track for “Shanti Samsara,” Ricky’s environmentally themed compilation for the Prime Minister of India. In 2015 Vito toured China with renown spiritual singer Miao as a multi instrumentalist, playing guitars, mandolin, tongue drum, keyboard, flute and sitar.

Throughout his work over the years in country, blues, pop and film/TV scoring, one constant has remained for Vito: his spiritual quest. For the last five years, in addition to producing and composing, Vito has been performing, and recording, the devotional music of yoga, Kirtan with various well-known acts all over California, including the largest yoga festival, BhaktiFest, playing on the Main Stage.