5 FLIGHTS UP No ratings yet.

In the past few years there have been an abundance of films too obviously designed to attract the aging baby boomer audience.  Most of these have been propelled by predictable story plots and clichéd dialogue.  5 FLIGHTS UP  targets this same audience, but with greater success possibly due to its engaging stars (MORGAN FREEMAN and DIANE KEATON) and the fact that it was based on the novel Heroic Measures by Jill Ciment.

Helmed by British director, Richard Loncraine, 5 FLIGHTS UP tells the story of Alex and Ruth Carver, a Brooklyn couple who have been happily married for forty years.  Having lived in the same 2 bedroom apartment for all of their married lives, they are cajoled by Ruth’s aggressive real estate niece, Lily, (CYNTHIA NIXON) to take advantage of a booming real estate market and to put their apartment up for sale.  With the money made on a sale, they could afford to purchase a more modern apartment – one with an elevator – something worth considering now that they are in their “sunset years”.

Though Alex would much prefer remaining in his home, the money is tempting since living in New York City is expensive and they are by no means rich. Ruth is a retired teacher and though he has been a somewhat successful artist, sales of Alex’s work have diminished over the years. In addition to this, their beloved dog, DOROTHY, has to undergo some very expensive surgery.

Though the story is a good one, some of the perspective buyers who invade the Carvers’ home tend to be stereotypes of the “typical” New Yorker:  The abrasive yuppie whose cell phone is glued to his ear, the lesbian couple and their dog, the “lookie-loo” woman who visits all the open houses simply because she’s nosy.  In all fairness, these characters might have been more developed in the novel.  Unfortunately, because of time restraints, it is often necessary to offer up quickie versions of characters who then frequently come across as caricatures.

The other element that seemed forced was a subplot of a hunt for a suspected bomb -wielding terrorist.  Apparently, the hunt was resulting in gridlock on the Williamsburg Bridge, something that could ostensibly hurt the open house.  It seemed that the true purpose of the subplot was to open up the set.  Most shots were those of interiors of the various apartments; the manhunt being aired on various televisions throughout the film, served to bring in the outside world.  The media’s supposed rush to judgment also made somewhat of a political statement, but this was very subtle.

The strength of this movie is in the depiction of a married couple, devoted to one another, despite having faced challenges throughout the years (they are a bi-racial couple who married at a time when it was illegal to do so in many states and they also had to deal with Ruth’s devastation at learning she was infertile.)

The casting of Freeman and Keaton is what makes 5 FLIGHTS UP well worth seeing if for no other reason than for the warmth they emanate and the remarkable chemistry they share. 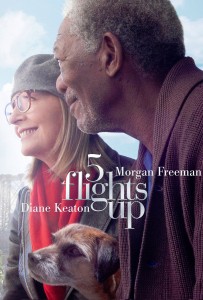 A long-time married couple who've spent their lives together in the same New York apartment become overwhelmed by personal and real estate-related issues when they plan to move away.

A long-time married couple who've spent their lives together in the same New York apartment become overwhelmed by personal and real estate-related issues when they plan to move away.